How Do We Change Our Meanings?

You Are Not Worthy….

“You are not worthy because you were born a woman. You have to earn your worth. Paying for your dowry will put us in severe debt, it might even make us bankrupt. I cannot love you, if I show you, love, you will never leave my home.”

From the time I could speak and understand, these were the meanings I was taught, by my mother, about myself. My father didn’t disagree, and my brother sided with my mother.

I learnt at a very young age not to ask for anything because I was led to believe that I wasn’t worthy of it. I once asked my dad for a plain black T-shirt; he bought it for me begrudgingly. Later, I overheard him complaining to my brother about it: I didn’t need it so why did I get it? Why did I waste his money?

I mentioned wanting a new outfit for my brother for my second graduation ceremony. He told me I was wasting our dad’s money while also manipulating him. I borrowed an outfit from a friend for the ceremony.

When we got engaged, my husband asked me what kind of ring I wanted. I told him that even if he tied a thread around my finger and declared it my engagement ring, I would be the happiest woman on earth. He insisted on getting me a ring, I told him I wanted a cubic zirconia ring because I vehemently refused to have a diamond ring.

I chose to have a very low-key wedding ceremony. I repurposed an old outfit for the reception and bought a wedding outfit at a knockoff price from a flea market. I lucked out: my in-laws never asked for a dowry.

Years later this played out every time I wanted to invest in my own growth, fear overwhelmed me. What if I put my family in severe debt because of my desires to want better for myself? What if I made them bankrupt?  I had to learn how we change our meanings, to change my story and my life.

How Do I Change That Story?

I wanted to change my experiences, but I needed to change my filter first. I ached to tell a more empowering story hence I embarked on a journey of research.

How Do We Change Our Meanings?

I started by replacing my fears with facts: reality never panned out as my mother predicted it would. There was no dowry paid when I got married, I didn’t make my parents bankrupt nor did I put them in severe debt. In fact, we came in considerably under budget for my wedding.

I found faith in the evidence and moved on to the next step – forgiving my mother for instilling these meanings and belief systems in me. This is the part I struggled with the most because I felt angry that she ingrained this in me often causing severe stress and anxiety for me every time I attempted to invest in myself. This stress and anxiety were a result of the contradiction in my unconscious brain – more on this later.

I started to scrutinize what “forgive” really meant. A quick Google search defines forgiveness from Oxford languages as to “stop feeling angry or resentful toward (someone) for an offence, flaw, or mistake.” But I couldn’t stop being angry and resentful.

I heard Oprah Winfrey describe forgiveness as “letting go of the hope that the past could’ve been any different” (than it was). Though this definition offered some peace, I still struggled with feelings of fear and anger that surfaced every time I wanted to do something for myself.

Analyzing these definitions, I realized there is a common theme, both are focused on “effects” – “stop feeling angry” and “let go of hope.”

Surely there had to be a better way to define words and to learn to change our meanings?

Definitions Need to Be Causes

My path crossed with John Lenhart of Flowcess who teaches that definitions need to be causes, so we are able to intentionally get the desired effects. He taught me about non-contradictory definitions that offer freedom with a quality control check to ensure that freedom isn’t abused. This method of defining words remains non-contradictory because the meanings have a qualitative and quantitative portion.

This definition allows me to feel angry towards my mother and not have to forget about what she did but not act upon it because there is nothing in it about anger or forgetting. Furthermore, if I acted upon my anger then I am infringing on the quality control check of the definition.

This definition has taught me that it is absolutely okay and human to be triggered but the quality control check ensures that I don’t react to the trigger. Embracing this definition/meaning has led me to have conversations with my mother, about money amongst other things, without reacting to being triggered. I am able to observe being triggered without succumbing to it. This is the power we gain when we know how to change our meanings.

The definition of love according to Oxford languages is “an intense feeling of deep affection.” The latter is focused on effects.

Why do these definitions offer us healing?

Based on a model for the mind and brain by John Lenhart, we have direct control of only about 10% of our brain – our conscious brain while the remaining 90% is unconscious.

The stress and anxiety I felt every time I tried to invest in myself was caused by the contradiction in my unconscious brain. It has an accurate record of every single thing that has happened to me, and it knew that I never put my parents in financial distress so the fear and anxiety I felt because of my mother’s words became a contradiction in my unconscious brain. I was telling myself a story that was a lie, and my unconscious knew this whenever I tried to act on it. I had to change my meanings to make a positive change.

As per John, the non-contradictory definition of “forgive” gives you the grace not to have to forget or feel good about someone who has hurt you in order for you to forgive them. This is important because every fact recorded by our brain has an associated emotion. Hence asking someone to dispose of a fact or change an emotion as a cause is advocating for brain damage because it has the same objective as electroshock therapy.

If one follows meanings offered by the dictionary definitions above, one is asked to feel good or forget facts as a means to achieve certain results which is supporting damage to the brain.

Learning how my brain works has taught me that rewriting my story begins with understanding my definitions, ensuring they are non-contradictory. What about your story? Are you happy with the one you currently have, or do you want to rewrite it? How do we change our meanings?

Kalyani is a certified Level 4 graduate of the Quantum Human Design system and is a 2/4 Sacral Time Bender/Manifesting Generator. She is also an anti-bullying specialist and a multiple award-winning author. Kalyani specializes in anti-bullying techniques for school-aged children as well as techniques to combat our inner bully/critic (for children and adults). 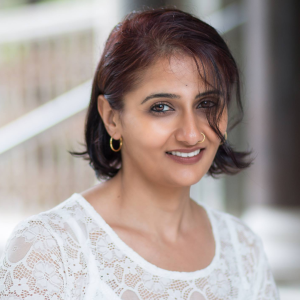 PrevPreviousWho Tells the Most Powerful Narrative of Your Life?